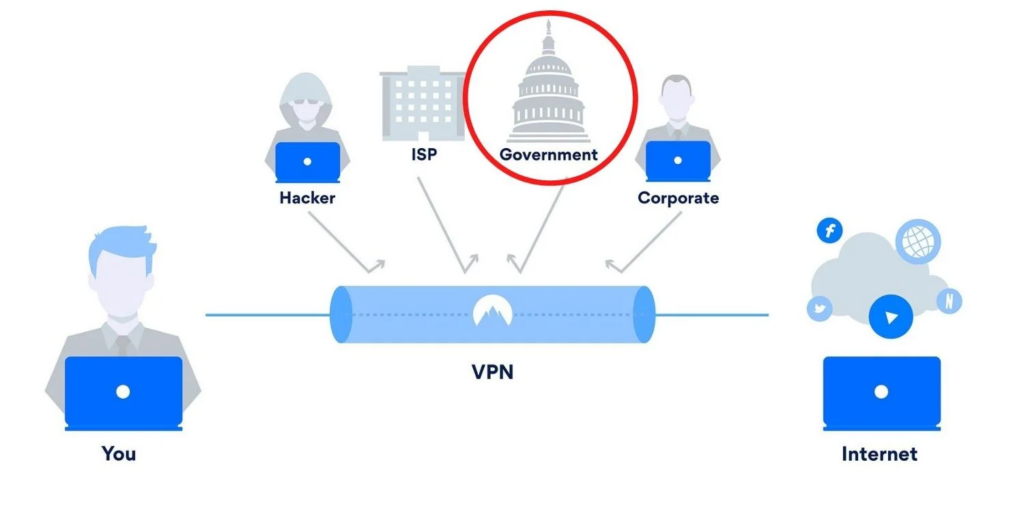 Can Governments See Who's Using a VPN?

Are VPNs as secure as they claim to be? Can Governments See Who’s Using a VPN? aware that you’re using a VPN? Everything you need to know is right here.

Many VPN services tout the ability to keep your data safe from the authorities and stay under their radar as one of their primary selling features.

Although many genuine VPN companies can prevent the government from watching and accessing your internet traffic, that doesn’t mean the government won’t be able to tell that you’re using one.

So, today, we’ll look at whether governments can tell whether you’re using a VPN and how they go about doing so.

Before we look at whether governments can track VPNs, let’s take a brief look at how VPNs function to see whether and how they can be followed.

The word “VPN” refers for “virtual private network,” as you may know. These are security protocols that allow a user’s data to be delivered to a distant server while also encrypting it .(this is important to remember for later). So that the ISP, cybercriminals, governments, as well as other third parties cannot read it.

Because online attackers nearly always infiltrate devices and networks through the internet; utilizing a VPN protects your data; by sending it through what many providers refer to as a “safe tunnel.” VPNs also allow you to mask your IP address (and hence your geographical location) and avoid geoblocks. And allowing you to access material that would otherwise be unavailable in your region.

Although VPNs may be hacked, doing so is difficult; thus most VPN users will never have their data accessed or stolen. VPNs are thus an excellent choice for anyone who wish to increase their online privacy and security.

Legitimate VPN services that prioritize your online privacy and security do not provide the government access to your data. You and only you have access to this. However, some VPN companies (typically those that are free to use) have the ability to sell your internet data to the highest bidder.

In other countries, VPN companies are also compelled to give the government backdoor access to customer data if requested. Even though VPN use is legal, some other firms store records containing specific types of user data! These are frequently connection or traffic use logs, which might individually include sensitive data.

The “no log” claims made by VPN providers are controversial. Because it’s hard to establish that any one provider isn’t storing records without having inside access. So, no matter how many audits VPN companies undergo; there is no way to be certain that they are not keeping records; and even a well-known provider’s “no-log” policy cannot be proven genuine or untrue. Isn’t it a bit concerning?

While this isn’t true of all VPN companies, it isn’t uncommon, especially with free VPN services. While a free VPN may sound appealing, keep in mind that these businesses must generate money somehow, and they frequently do so through illegal activities.

Furthermore, even while your VPN is active, poor-quality VPNs may let your ISP, the government; and other parties to know exactly what you’re doing or where you’re situated. They are also more vulnerable to hacking since their security and privacy safeguards are inadequate. To secure yourself as much as possible, make sure you’re utilizing a well-known and reliable VPN provider.

While governments cannot normally view your internet data when you use a VPN, they may often detect your use. “So what?” you might be thinking. at this time, and yes, if you live in a nation that allows VPN use, this isn’t necessarily a major concern. This is a major worry for people who live in countries where VPNs are prohibited or severely limited. So, how can governments detect your VPN usage?

How do governments assess VPN usage?

Because they can see that your internet traffic is flowing through an encrypted server, both the government and your ISP can tell whether you’re using a VPN or not.

Because encryption is one of the fundamentals of VPNs, there isn’t really a method to go around it. So, in places where VPNs are outlawed, this is essentially how governments may punish individuals for using them.

However, if using a VPN is legal in your place of residency, this isn’t a major concern. Remember that the authorities can nearly always tell that you’re using a VPN. They can’t track what you’re doing on the internet, your browsing history, or your IP address. All of this information is encrypted by your VPN.

The Rule that Doesn’t Apply

Although most countries cannot view your internet data when you use a VPN, this is not always the case. As is the case with practically every business, VPN providers in the United States have a legal responsibility to react to warrants and court orders issued by legal authorities.

This is done if law enforcement suspects you of committing crimes online and wants to look into your internet activities or learn more about you. If a law enforcement branch issues an official request, warrant, or court order, your provider must cooperate and allow that law enforcement to examine your activity or IP. However, this is usually only feasible if the VPN service keeps logs for each user.

VPNs are beneficial, but they are not impenetrable

It’s reasonable to argue that VPNs can give you more privacy and security while you’re online. They cannot, however, completely avoid government surveillance because VPN usage is easily detected.

While your online data is normally unavailable to the government, your ISP, or other third parties, it may be seen for legal purposes in specific instances. Of course, as long as you follow the law online, this shouldn’t be an issue for you.