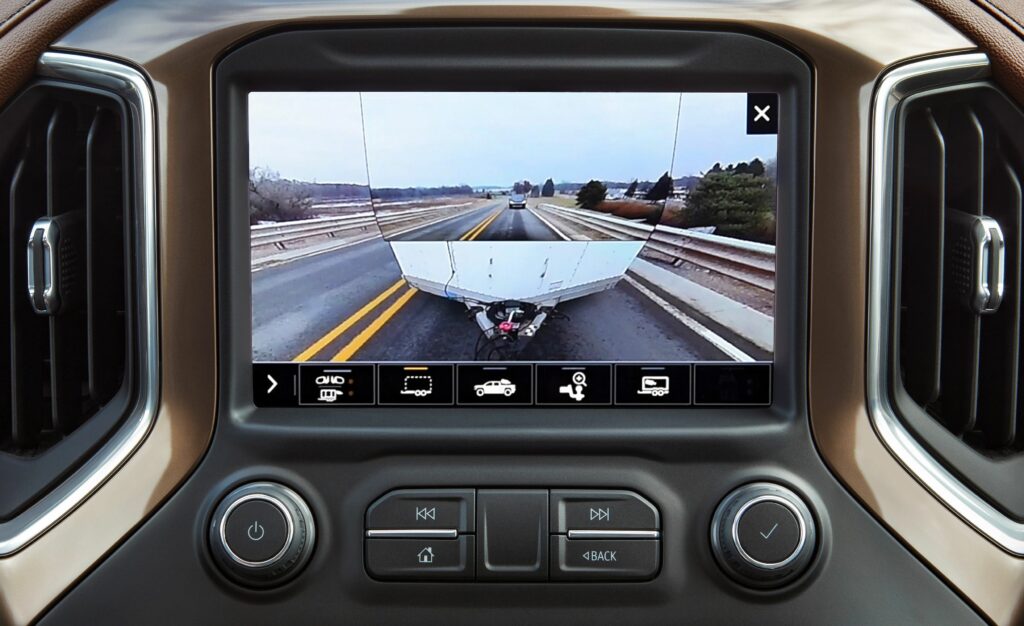 The Rearview Mirror Camera is simple to install and you can do it yourself if you are a bit handy. All vehicles are a little different, but the installation process for a backup camera is pretty much the same no matter what you drive. You must:

A backup camera mirror is a mirror that displays a standard reflected view and a 180-degree unobstructed view of what is behind a vehicle. A camera mounted on the rear of the car provides a 180-degree view, displaying it in the rearview mirror.

To activate the rear camera mirror, the driver turns the tab on the bottom of the mirror housing, similar to how day and night views work with a standard rearview mirror. Depending on the design, the controllers can adjust the brightness level, camera angle, and even zoom in and out. According to General Motors, a rearview mirror with a backup camera can be beneficial at night because it provides a clearer, better-lit view than the standard rearview mirror.

However, keeping the camera lens clean can be difficult in situations where a continuous spray of sand coats the lens, such as when driving on wet dirt roads or on the pavement covered with melting ice, snow, and salt.

A Rearview Mirror Camera, also known as a backup camera, lets you see what’s behind your vehicle without having to look backward. Though the device comes standard with many new car models, you can add a rear-view camera to your vehicle if it didn’t come with one.

A rearview mirror with a backup camera is ideal for specific situations. It works similar to a backup camera, although it often provides a high-definition view with a wider field of view. It also remains active after switching from reverse to drive.

Of course, the effectiveness of the rear camera mirror depends on where the camera is located and what it shows the driver. The most effective ones place the camera lower in the rear of the vehicle. In our experience, cameras mounted higher, especially those on raised trucks, don’t offer much practical use.

Modern vehicles are equipped with an ever-increasing variety of high-definition cameras that provide rear and front views, top-down panoramic views, and even side views to help the driver park. Trucks offer a range of tow-related cameras, off-roaders offer views of what’s under the vehicle when tackling rough terrain, and performance vehicles will record a front view of your sessions.

The effectiveness of the Mirror Camera For the View

weekends on the track, with data overlays and the ability to upload and share to social media. The rear camera mirror is just one of the many innovations that these cameras facilitate.

Although it’s tempting to use it all the time, a rear camera mirror forces the driver’s eyes to adjust to a new depth of field. Whether looking forward through the windshield or checking the camera view in the rear camera mirror, images are initially blurry. It takes a while for your eyes to adjust and see the camera view clearly. Looking back on the road requires the same momentary refocusing of your vision. Some drivers may find this uncomfortable.

Automotive technology has evolved significantly over the years, making driving more comfortable. Even with autonomous driving, modern vehicles come with a lot of equipment, such as a Rearview Mirror Camera. Installing a backup camera in your vehicle is much easier than you think and can be done for less than a few hundred dollars.

Backup cameras are now available as replacement parts that anyone can install on older vehicles. In new vehicles, a reversing camera is fully integrated with the electronics, so system components are hidden from view. This is also the goal when installing a custom aftermarket setup.

Purchase of the necessary equipment

Tools you will need

Like most installations, you need to gather the necessary parts and tools that you will need. Most of these tools probably already exist in your home, but here’s what you need to get the job done while being safe.

Before working on your vehicle, disconnect the battery ground cable and make sure the car is not running. Failure to do so may result in electrical failure or serious injury. Make sure you’re wearing the proper safety gear because the last thing you want is to damage the new equipment you just bought or harm yourself.

You must have access to where you are mounting the equipment. Many times it will be simple, such as the dashboard or the rearview mirror. The only time you won’t mount new equipment is if you already have a spare head unit that supports the feature. You will then need to access the rear of the main unit.

Then you need to mount the camera on the vehicle. The easiest way is to use a license plate bracket since it’s just two screws. However, for aesthetic reasons, you want to retain as much of the OEM look as possible, so mount it next to the trunk handle. This can be done using double-sided tape or by drilling holes in the trunk.

When using double-sided tape, you need to make sure both contact surfaces are clean, as any debris can potentially knock over the camera while driving. Contact surfaces can be cleaned with any cloth and isopropyl alcohol.

Finally, you need to drill through the trunk to route the camera cable inside. This step will be the same for any type of camera mount if you want to keep it looking clean. This step can be tricky, but you just need to make sure nothing gets damaged in the process. You can start drilling if there are no cables in the way. Route the cable through the hole you just drilled and any potential cutouts to access the cable inside the vehicle.

You must locate the fuse panel or a switched power terminal to power the backup camera. Some vehicles have dedicated posts for this, which makes it very convenient, but all cars have fuse boxes. This step is important because you probably want to start your car the next morning. If this is not done correctly, the rearview camera system will continually drain battery power at night.

After checking which fuse changed the power supply, you need to grab a fuse and insert it into one of the terminal pins as shown in the picture. As before, tuck the wires into the necessary trim to maintain a clean appearance.

For the rearview camera to work, the camera needs to know when the car is in reverse, and it needs a video signal. This is done by running the supplied cable from the front to the end of the car. This step is relatively simple.

Then you need to provide a signal to the rearview camera. This can be done by tapping on the backup lights. Simply remove the tail light assembly and locate the wires that go to the reverse light. Grab a friend and have them hit the brake pedal. This will send power to the brake light, making it easier to identify which wire to connect.

Using your multimeter, check which wire has 12 volts. You need to add the new signal wire into what is already mounted on the car. The easiest method is to use a Posi-tap, or another electrical connector, to insert the new wire into the existing one. In this case, use a twist connector to make the process easier. An alternative method is to strip the wire manually and solder the new one.]

Once this step is complete, the rearview camera system should be fully operational. Check your work by reconnecting the ground cable to the battery terminal to power it. Then put your car in reverse and check if the camera is working. If you can see behind your vehicle, you are ready to get the car back together and give it a clean look.

In case that doesn’t work, double-check your work and make sure all the wires are going to the right places. It is much easier to solve the problem before the cables are hidden behind the trim. Make sure the added cable does not interfere with anything.

After verifying that the new system works, you can put the car back together to restore it to its original appearance. Since you removed some trim pieces, now it’s time to reinstall them.

They will generally snap into place with no problem, although they can be a pain as there is another cable underneath. Tuck the new cables behind the existing cables inside and use zip ties to hold things in place. Once the trim is reinstalled, you’re ready to drive!

Is it difficult to install a rearview camera?

If you’re planning on keeping your old car but still want the peace of mind that a backup camera provides, it’s not too difficult to install one yourself. Aftermarket manufacturers now produce a wide range of DIY backup camera kits.

How much does a reversing camera cost?

Is a rearview camera worth it?

Testing by AAA shows that rearview cameras can help reduce these accidents by expanding the area behind the car that the driver can see. AAA found that the improvement in rear visibility ranged from 11% to 75%, depending on the type of vehicle.

How long do backup cameras last?

Based on what vehicle owners are saying on online forums, it could be as long as 10 years or as little as 10 days. Some owners report issues with cameras turning off or only working intermittently before the new-car smell wears off, while others say they’ve received years of dependable service.

Can a backup camera be installed in an old car?

Fortunately for you, you don’t have to buy a new car, you can simply fit a backup camera into your existing car.

Do you have to drill a hole to install a rearview camera?

No, you don’t need to drill a hole in your car. you can run the rearview camera wire through the tag, light, or even through the grommet.

Why don’t they record? The rear cameras don’t record for two main reasons. The first is that these cameras only turn on when your car is in reverse to save battery power. A constantly running camera is another drain on your car’s power systems and requires careful engineering to function properly.

Does a backup camera add value to your car?

Especially in the 4×4 and SUV markets, having a rearview camera system or parking monitor will add value, and this modification is easy to install yourself.

Which is the best wired or wireless backup camera?